Faking New York in ‘The Avengers’ 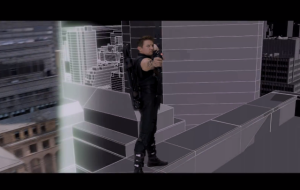 I used a few clips from last year’s superhero blockbuster The Avengers to illustrate the lecture I gave at the Capitalist Superheroes book launch last week, mostly because it has become the superhero film most commonly associated with ‘the Obama age,’ as well as one that very clearly illustrates the extent to which the 9/11 attacks remain so central to America’s 21st-century mythology. I screened the one scene in the film that isn’t lit, framed, and staged like a hyper-expensive Buffy episode, relating the celebrated long, swooping shot to Susan Sontag’s definition of fascist aesthetics:

Fascist aesthetics … flow from (and justify) a preoccupation with situations of control, submissive behavior, and extravagant effort; they exalt two seemingly opposite states, egomania and servitude.  The fascist dramaturgy centers on the orgiastic transactions between mighty forces and their puppets. Its choreography alternates between ceaseless motion and a congealed, static, ‘virile’ posing. Fascist art glorifies surrender; it exalts mindlessness: it glamorizes death.

Visual effects company ILM has now released a short video showing how these scenes were actually created, and how the New York we see in the film is actually a digital model of the city (as if that weren’t already fairly obvious).

Watching the short video also reminded me of a passage from my own book, about the sense of total artifice that has come to dominate cinematic representations of New York, from the chapter about the utopian/dystopian urban environments of Spider-Man and The Dark Knight:

The point here is not that the footage of Times Square in this scene constitutes an artificial representation of an actual location. It is rather that Times Square in its remodeling and rebranding has been defined as fundamentally artificial, and that the garish, balloon-filled amusement park pictured in the film does not represent the location so much as it provides a specific articu- lation of it. In a Baudrillardian sense, this image of a “hyperreal” Times Square comes to (re)define our understanding of the “real” Times Square, thereby making the reproduction superior to the original — about which one might now legitimately ask whether it even exists at all outside of this overdetermined phantasmal image.